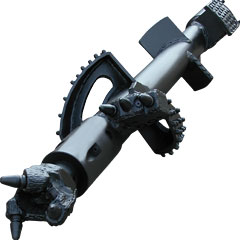 We would be pleased to advise you

Do you have questions about our products or application examples? You can find the right contact for your region here.

Soil mixing is used when soil needs to be solidified. A cement suspension is added and simultaneously mixed with the soil. When the mixing equipment is removed from the soil, it further mixes the suspension with the soil material.

Find out more about soil mix and everything you need to know about the method!

How does soil mixing work?

Before the soil mixing process can be initiated, the subsoil needs to be examined carefully. The soil geology needs to be easily penetrated by the suspension. If this prerequisite is given, the cement suspension is pressed into the soil. This is done through an internal pipe via nozzles on the mixing equipment up until the required depth.

The soil mixing equipment paddles ensure thorough mixing of the soil with the cement suspension. After reaching the final depth, the mixing equipment is pulled back whilst pressing in further bonding agent. Homogenously mixed soil columns are produced by changing the direction of rotation and alternate raising and lowering.

One of the biggest advantages of soilmixing is that it is mostly free of vibration and noise. This means it can also be used in densely populated areas. Apart from improving or solidifying soil conditions the soil mix system can also be used for building pit circumvallation and trench shoring.

What kind of soil mixing tools and equipment are used?

The high-quality soil mixing head is the central element of the process. EMDE supplies single, twin or triple tools specially adapted to your drives and requirements. We also offer you a rotary drilling rig with soil mixing pipe (twin mix).

High-quality production and the best available materials make the soil mixing system by EMDE a reliable and durable product. If you have questions about the realization of soilmixing on your building ground, contact us!

You can also get in touch with our international sales team for individual consultation. We are looking forward to you and your building project.